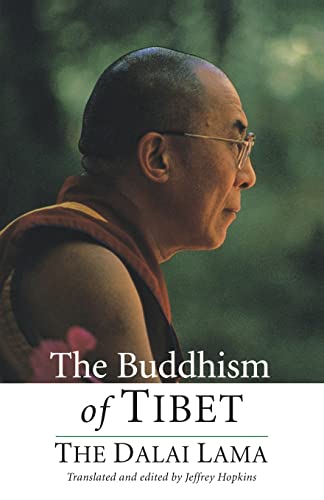 THE BUDDHISM OF TIBET

As Tibetan Buddhism matures in the West, the release of more substantive and esoteric literature becomes timely. With this intermediate audience in mind, and with the hope that "even a few people for a short period could have some internal peace," the Dalai Lama here offers two of his original writings alongside two ancient texts. His works "The Buddhism of Tibet" and "The Key to the Middle Way" comprise roughly half of the book. They reveal some of the secondary and more cerebral layers of Tibetan Buddhist study, going well beyond the primary embrace of the Four Noble Truths. Emptiness, "the final mode of being of all phenomena," is a recurring motif throughout the volume. The second half includes "Precious Garland of Advice for the King," 500 quatrains written by Nagarjuna, who lived 400 years after the Buddha. Written to advise the Indian king Satavahana, it has specific counsel on ruling, plus more general material on emptiness and compassion. Although theoretically softened by a caveat of application to both sexes, the prohibition against desiring women, who are partially described as "a source of excrement, urine and vomit," among other similar vitriolic phrases, will be hard to stomach for many. The book concludes with an exposition of a relatively short poem, "Song of the Four Mindfulnesses" by Kaysang Gyatso, the Seventh Dalai Lama. No doubt a book of merit, this volume is most appropriate for serious students who are ready to wade through fairly heavy intellectual currents.