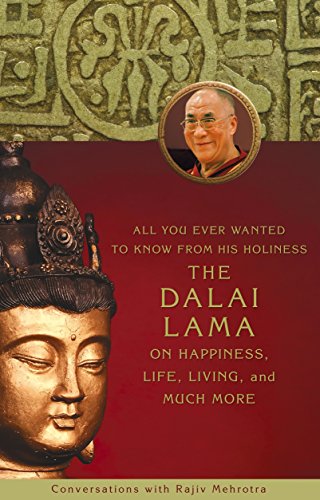 All You Ever Wanted to Know from His Holiness the Dalai Lama on Happiness, Life, Living, and Much More: Conversations with Rajiv Mehrotra

A longtime student of the Dalai Lama, Mehrotra has collected more than 25 years of his interviews with the Tibetan spiritual and political leader. The discourses on happiness, compassion and the commonalities among religions, edited from notes and transcripts, cover ground familiar to those acquainted with the Dalai Lama's prolific output, but the general reader may be disoriented by the spiritual master's in-depth exploration of complex Buddhist concepts about phenomena, consciousness and shunyata (emptiness). The author, an Indian public television talk show host and secretary/trustee of His Holiness' Foundation for Universal Responsibility, has edited several previous books on the Dalai Lama and is able to ask detailed, sometimes esoteric questions about Buddhist ideas and practice. The responses reflect the Dalai Lama's longstanding interest in the intersection between Buddhism and scientific inquiry as well as his knowledge of the various Mahayana philosophical schools. While this book may not always be accessible to beginning students of Buddhism, frank reflections after the spring 2008 protests in Tibet and elsewhere update readers on the current thinking of this Nobel Peace Prize recipient. Despite the promise of simplicity made by the title, most readers interested in the Dalai Lama's thoughts would be better served reading his own books.