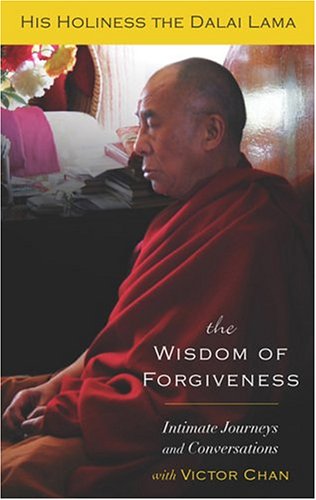 THE WISDOM OF FORGIVENESS: Intimate Conversations and Journeys

"Do you hate the Chinese?" Chan asked the Dalai Lama when they first met in India in 1972. It was a live question, since Chan hailed from the country that had forced the Tibetan spiritual leader into exile and subjugated the Tibetan people. The Dalai Lama replied immediately with the English word "no," then stated through an interpreter that he had forgiven the Chinese and did not blame China's people. Drawing on Buddhist principles, this book loosely discusses His Holiness's ideas on forgiveness, though Chan presents them gently through stories, not didactically as a step-by-step how-to manual. For example, one chapter arises in the context of the Dalai Lama's travels in war-torn Belfast, where he spoke about forgiveness to the families of victims of terrorist attacks. To research this book, Chan traveled with the Dalai Lama off and on for several years, spent time with him at home and conducted numerous interviews. Apart from the expected teachings on forgiveness, what comes through most clearly is the personality of the Dalai Lama himself: his humor, playfulness and joy. We learn that he had something of a temper as a young man and that he can't resist pulling men's beards. Somehow, the book's serious call to forgiveness becomes all the more engaging and possible because of the Dalai Lama's own lighthearted spirit.