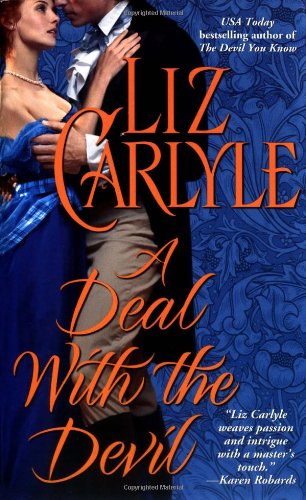 A DEAL WITH THE DEVIL

Carlyle's Devil series ( , etc.) continues in this historical romance featuring an embittered earl and a housekeeper with something to hide. Aubrey Montford comes to Castle Cardow armed only with forged references and towing a small boy behind her. The only tenant of the castle is the irascible Major Lorimer, an ailing alcoholic whom no one in the household can bear for long. Nevertheless, Aubrey soon endears herself to the Major by restoring the castle to its former glory. The estate's absentee owner, the Earl of Walrafen, is content to leave Cardow in Aubrey's capable hands until the Major, his uncle, is found shot to death in his room. Giles, Lord Walrafen, returns to Cardow, though it holds only unhappy memories for him. As he seeks his uncle's murderer, he finds himself drawn to the beautiful but strangely reserved Aubrey—but she's also the prime suspect in his investigation. Carlyle sets up a locked-room mystery with few suspects, so there's far more romance here than suspense. Fortunately, the chemistry between Aubrey and Giles is intense, and their relationship possesses a maturity that distinguishes it from typical love-between-the-classes romances. On the whole, Regency fans who prefer their romances mixed with a little intrigue will be charmed by Carlyle's newest offering.