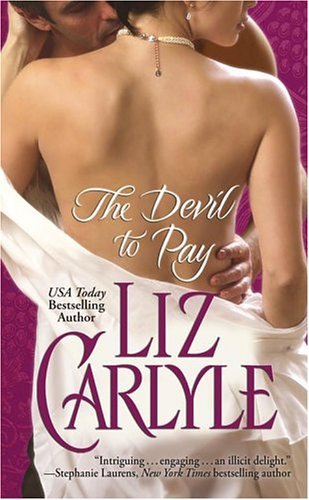 THE DEVIL TO PAY

Sensual and suspenseful, the newest entry in Carlyle's Regency-era Devil series (following ) contains plenty of heated romance and an engaging heroine who lives two lives. By day, Sidonie Saint-Godard is a respectable young widow, but at night she becomes the seductive Black Angel, robbing wealthy men who mistreat women. Sidonie, the illegitimate daughter of an aristocrat, is painfully aware of the plight of unwed mothers and believes she can right society's wrongs by robbing vain men to help the women they harm. Her successful run falters when she targets the marquess of Devellyn, the notorious Devil of Duke Street. Disguised as a lusty street trollop, Sidonie seduces Devellyn, but the encounter kindles real passion, which complicates matters when Sidonie learns that she stole not only items of monetary worth from Devellyn but also something of sentimental value. Tension escalates sharply as Sidonie, realizing that Devellyn is in a vengeful rage, unwisely risks returning his items. Other revenge seekers close in on Sidonie until Devellyn's proposal becomes the only solution to guarantee her safety and reputation. A few contrived plot twists bring about a satisfying denouement, but this is a small flaw in an otherwise lively and absorbing romance.