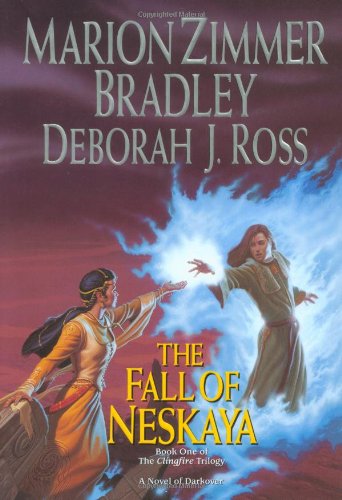 THE FALL OF NESKAYA: Book One of the Clingfire Trilogy

Fans of Darkover, Bradley's popular series of the planet of the Bloody Sun, rejoice. As Bradley's health was declining, she and Ross sketched the new Clingfire Trilogy, set in the aftermath of the Ages of Chaos when the Hundred Kingdoms used vicious telepathic weaponry to annihilate their neighbors. This solid opener, like others in Bradley's canon, centers on the coming-of-age of a -gifted youngster, Coryn Leynier, who becomes under-Keeper at Neskaya Tower, a powerful hub of the psi Tower network, and eventually finds himself pitted against both evil human foes in battle and black psionic wizardry in the Overworld. Ross has fleshed out Bradley's encyclopedic vision of the Darkovian Dark Ages into a competent, fast-paced narrative congruent with the late author's familiar 1960s theme: "make various kinds of love, but not nuclear war." Ross also seems to have mastered the familiar Darkovian vocabulary, though perhaps not injecting it so frequently, as well as Bradley's absorbing minutiae of life under the Bloody Sun—copper butterfly hairclips and all. With ancient Neskaya Tower crumbled in the cataclysmic conflict between Coryn Leynier and his enemies and Bradley now gone, the next two volumes of the Clingfire Trilogy should showcase Ross's literary strength—her sensitivity to human needs and talents—even more clearly.