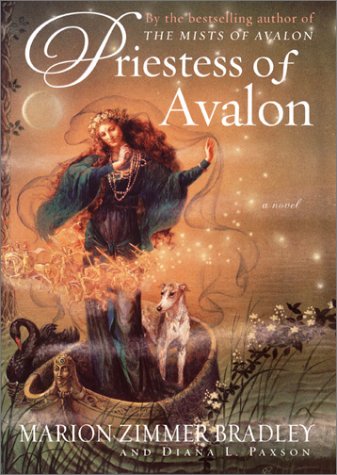 (1982), a feminist goddess-oriented retelling of the legend of Arthur, won acclaim and a crowd of lifelong fans for Bradley, also author of the Darkover series. Now, after Bradley's death in 1999, this prequel—coauthored by skilled fantasy writer and friend Diana L. Paxson ( )—completes her story of the women of mystical Avalon and their attempts to influence a world caught in the grip of unavoidable change. In A.D. 296, young British princess Helena goes to the Isle of Avalon to learn the path of the goddess. Helena grows in spirit and wisdom, awaiting the day when her initiation prophecy will become real and she'll meet the man of her dreams. He turns out to be Flavius Constantius Chlorus, fated to become the Roman emperor. Her aunt, High Priestess Ganeda, aims to wed a more biddable girl to the Roman power structure, but when Constantius chooses Helena, Ganeda exiles her from Avalon. Helena gives birth to Constantius's son, Constantine, and counsels her lover through the intrigues of a vast and dangerously unbalanced empire. Separated by civil demands from her family, Helena seeks the answers her troubled soul demands during a pilgrimage through the Holy Lands. The message that all religions call on the same higher power should go over well with fans of . Paxson's own skill at bringing historical characters and places to vivid life enriches Helena's story. This final book in the Bradley canon is sure to please her devotees and win her more.

The Mists of Avalon