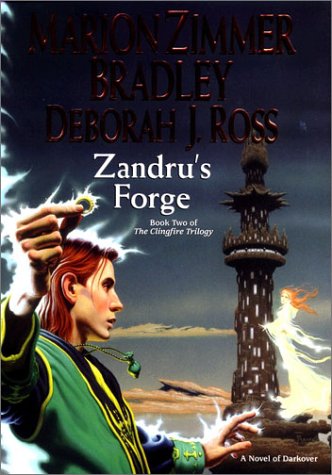 In the second Clingfire book (after 2001's well-received ), Ross does justice to her late coauthor's vision even if the plot is weaker than most in the Darkover saga. At the end of the age of the Hundred Kingdoms, "laran" (psi power) can be used to make terrible weapons that can kill thousands from a long distance. Carolin Hastur, heir to the Hastur throne, and Varzil Ridenow, a noble child with extraordinary laran, resolve to eliminate the threat posed by these weapons. What the pair devise will forever change the face of their world. These two characters, however, are less interesting than Carolin's friend Eduin MacEarn, who finds himself in a Hamlet-like struggle after vowing to take vengeance against the Hasturs who defeated his father. Unfortunately, a deus ex machina to dispense with Eduin's uncertainty arrives about halfway into the story, after which little conflict or suspense remains. Darkover fans who wondered how Varzil's Compact of Honor came about will welcome this entry, but it's unlikely to win the series new readers.