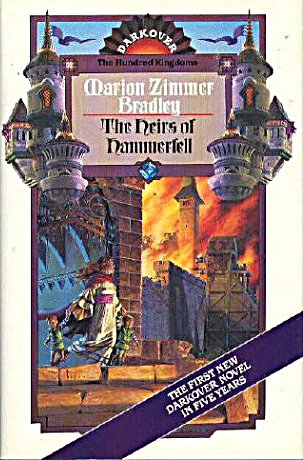 As the first Darkover novel to appear in hardback and the first new series entry in five years, this book carries a heavy burden of expectation, which, unfortunately, it does not fulfill. Set in the era of The Hundred Kingdoms, it tells of the twin sons of the Duke of Hammerfell, separated as children after the destruction of their home and the killing of their father by Ardrin, Lord of Storn, as a result of an ancient blood feud. Alastair, the elder, is raised by his mother, the leronis Erminie in Thendara, the lowland capital of the Hasturs, while Conn, the younger and gifted with telepathy, is saved by an old retainer and grows up with the mountain people of the Hellers. When the two are reunited as adults, Alastair, contemptuous of his brother as a country bumpkin, sets out to reclaim his heritage, while Conn, viewing his twin as a fop and a weakling, stays behind to protect his mother and fall in love with Alastair's promised wife, Floria, a monitor trained to work in the Towers. While Bradley's pleasant tale should please Darkover fans, it lacks the power, depth and darkness that has informed the best of her previous works set under the Bloody Sun. ( Dec. )
close
Details