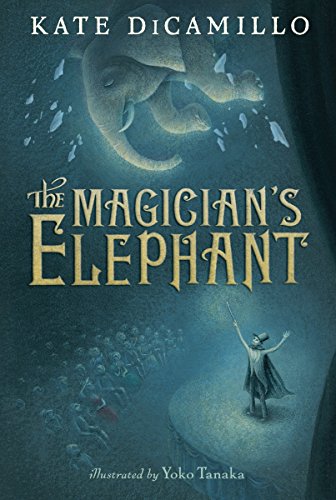 In DiCamillo's fifth novel, a clairvoyant tells 10-year-old Peter, an orphan living with a brain-addled ex-soldier, that an elephant will lead him to his sister, who the ex-soldier claims died at birth. The fortuneteller's prediction seems cruelly preposterous as there are no pachyderms anywhere near Baltese, a vaguely eastern European city enduring a bitter winter. Then that night at the opera house, a magician “of advanced years and failing reputation” attempts to conjure a bouquet of lilies but instead produces an elephant that crashes through the ceiling. Peter learns that both magician and beast have been jailed, and upon first glimpse of the imprisoned elephant, Peter realizes that his fate and the elephant's are linked. The mannered prose and Tanaka's delicate, darkly hued paintings give the story a somber and old-fashioned feel. The absurdist elements—street vendors peddle chunks of the now-infamous opera house ceiling with the cry “Possess the plaster of disaster!”—leaven the overall seriousness, and there is a happy if predictable ending for the eccentric cast of anguished characters, each finding something to make them whole. Ages 8–13.