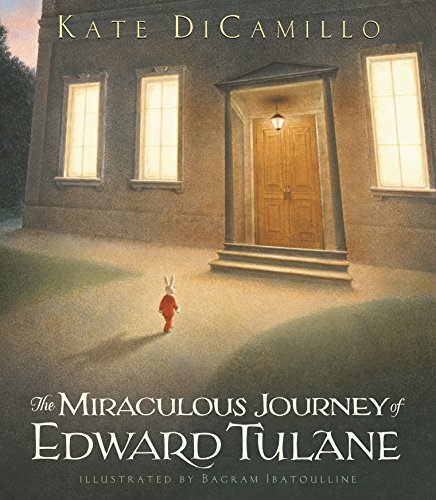 The Miraculous Journey of Edward Tulane

Although Edward Tulane resents being referred to as a toy, much less a doll, most of us would regard him as such. He is, in fact, a rabbit made mostly of china, jointed with wire at the elbows and knees, so that he has quite a range of motion. His ears are bendable wire, covered with rabbit fur, so that they can be arranged to suit his mood—"jaunty, tired, full of ennui." He has a lovely, fluffy rabbit fur tail, as well. He prefers not to think about his whiskers, as he darkly suspects their origin in some inferior animal. Edward, thanks to his owner's grandmother, has more clothes, and certainly more elegant clothes, than most children. He even has a little gold pocket watch that really tells time. But the most important thing that Edward has in his pampered life is the love of a 10-year-old girl named Abilene Tulane.

Surely, Edward Tulane is a rabbit who has everything—everything that is, but what he most needs. There will be inevitable comparisons of Edward Tulane to , and Margery Williams's classic story can still charm after 83 years. But as delightful as it is, it can't match the exquisite language, inventive plot twists and memorable characters of DiCamillo's tale. Edward, unlike Rabbit, has never thought of himself as less than real, he just hasn't caught on to what it means to love anything or anyone beyond his own reflected image.

Until, that is, he is rudely set off on the miraculous journey of the title—a journey that begins when Abilene's grandmother tells her and Edward a strange fairy tale of a princess who does not know how to love, and whispers in Edward's ear, "You disappoint me." And the journey ends, as any true fairy tale should, with a happily ever after. But it is the journey from pride through humiliation, heartbreak and near destruction that brings Edward to that joyful ending.

Even in the galley stage, this is a beautiful book. Ibatoulline's illustrations are simply wonderful, and the high quality of the design incorporates luxurious paper and spaciously arranged blocks of text. But a story for today about a toy rabbit? Okay, I thought, Kate DiCamillo can make me cry for a motherless child and a mongrel stray. She can wring my heart following the trials of two lonely children and a caged tiger, and bring tears to my eyes for a brave little lovesick mouse, but why should I care what happens to an arrogant, over-dressed china rabbit? But I did care, desperately, and I think I can safely predict you will, too. Ages 7-up.