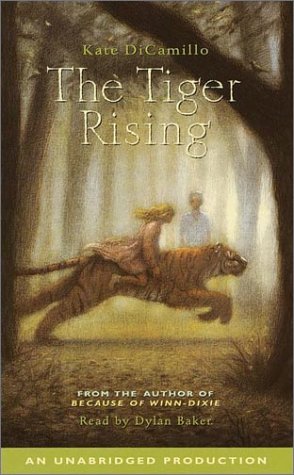 DiCamillo's evocative, emotionally rich story about a boy caught in the powerful grip of grief is given even more dramatic depth via Baker's () sensitive and colorful performance. Rob has become a "pro at not-crying" in the six months since his mother died. Rob's father hasn't allowed such displays and has moved himself and Rob to a new town and a new start. But Lister, Fla., hasn't been so great. Rob is plagued by a mysterious rash on his legs and endures the endless taunts of bullies; his father struggles as the maintenance man at a local motel owned by a demanding blowhard. Everything changes, however, when Rob stumbles upon a real-life caged tiger in the woods behind the motel and shares his discovery with Sistine, a spitfire of a girl who has just moved to town. The tiger soon stands in for the wild pain and anger that have overwhelmed Rob and Sistine, and they become determined to find a way to free the animal (and their feelings). Baker's pacing is perfect and his turn as sassy, no-nonsense motel housekeeper Willie May crackles. His other characterizations shine as well, especially the often haughty-sounding Sistine and the brief, humorous bits as unctuous Southerners at Rob's school. Ages 8-up.