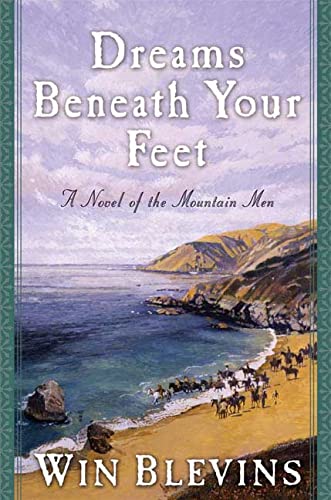 Dreams Beneath Your Feet

This is the sixth and best in Blevins's exciting Rendezvous series (following ) featuring mountain man Sam Morgan. It's 1840 and Sam, seeing the end of his beloved fur trade, decides to head for California and a settled life with his friend, Hannibal, and Sam's daughter, Esperanza, raised on the Crow reservation since her mother died in childbirth. The three of them along with a party of friends and Indian relatives endure harsh weather and forbidding terrain on their journey from the Wyoming territory to the coast, but the situation goes from bad to worse after they find and care for a badly injured woman, Lei Palua, who has escaped from a psychopathic gang whose leader, Kanaka Boy, vows to get her back. When Sam and his group are bushwhacked, their herd of horses stolen and Esperanza kidnapped by Kanaka Boy, Sam embarks on a rage-filled orgy of bloody violence. Blevins, a masterful western storyteller, really piles on the torture, mutilation and rape, but the action is fast-paced and the details of frontier life, the fur trade and Indian lore authentic.