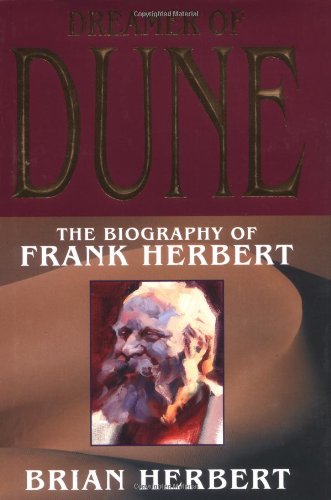 DREAMER OF DUNE: The Biography of Frank Herbert

Frank Herbert's oldest son (playfully called "number one son" by his father) paints an extraordinary portrait of the visionary behind the ecological SF classic (1965), its bestselling sequels, the David Lynch film and many other works. Compulsively readable, despite the often extraneous detail, the biography explores the evolution of a "modern day Socrates" who "tore into... unexamined linguistic and cultural assumptions," extrapolating "words and traditions he thought might exist in the future." At age eight, Herbert, the child of impoverished, "on-again, off-again alcoholic" parents, announced, "I wanna be author" and went on to sell his first short story at 17. Brian charts the influences on his father's masterpiece, from T.E. Lawrence and Jung to world religions, particularly Zen Buddhism. The author also depicts the symbiotic relationship between Herbert and his second wife, Beverly (Brian's mother), a talented copywriter, but admits that Herbert, an incessant nitpicker, never quite accepted "number two son" Bruce's gay lifestyle and regularly used a lie detector on both boys. Estranged for many years, Brian and his father eventually made peace, learning "how to talk story" and collaborating on (1986) shortly before Frank's death from cancer at age 65. This moving, sometimes painfully obsessive biography is an impressive testament of family loyalty and love. A must-read for Herbert fans (both senior and junior), it includes family photos and a bibliography.