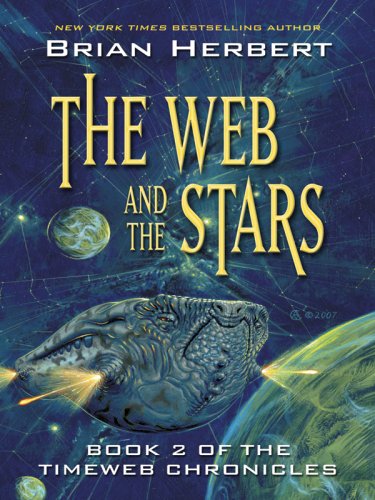 The Web and the Stars: Book 2 of the Timeweb Chronicles

In the sequel to (2006), bestseller Herbert ( ) offers readers a space opera where interstellar travel is mostly embargoed and characters spend over a third of the book in solitary self-reflection. When the alien Parvii cut two empires off from the podship networks, the Parvii derail a war between humankind and the shape-shifting Mutati and forcibly separate many members of Herbert's large cast. Frequent viewpoint shifts and lengthy stretches of internal monologue make character development all but impossible. Neither guerrilla mystic Noah Watanabe nor his nemesis, Doge Lorenzo, are more than cartoon archetypes, and hardly anyone else has enough time onstage to acquire much depth. The short chapters also create an odd tonal dissonance, with heavy-handed philosophical musing regularly interrupted by crisp plot newsbreaks. Pacing improves somewhat in the book's second half (a grisly torture sequence marks the turning point), but in the end, ideas are spread too thin and most characters drawn too broadly to lift the novel above pulp-era comic strip quality.