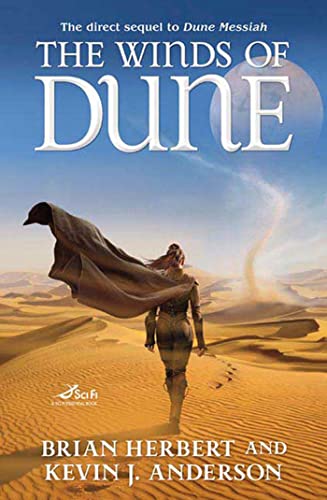 The Winds of Dune

Set immediately after Frank Herbert’s (1969), this satisfying tale from Herbert’s son and Anderson ( ) follows Jessica, the mother of galactic emperor Paul Atreides, as she returns to the desert planet Dune for her son’s funeral. Paul’s suicide after his mistress’s childbed death leaves his sister, the insane and brutal Alia, as regent for his twin children. Alia releases Princess Irulan, Paul’s wife and biographer, from house arrest on the condition that she present Paul as a god, even as Bronso of Ix circulates contrasting writings focusing on Paul’s humanity. Alia, Jessica, Bronso and Irulan can describe aspects of Paul, but no single narrative can capture him. Fans of the original Dune series will love seeing familiar characters, and the narrative voice smoothly evokes the elder Herbert’s style.