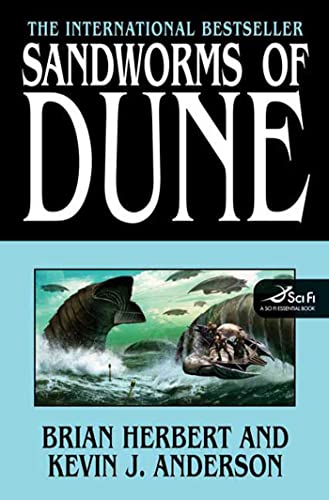 Longtime collaborators Herbert and Anderson set themselves a steep challenge—and, in the end, fail to meet it—in this much anticipated wrapup of the original Dune cycle (after 2006’s ). A large cast scattered across the cosmos must be brought together so that the final, all-powerful Kwisatz Haderach may be revealed in the ultimate face-off between humankind and the machine empire ruled by the implacable Omnius. Though pacing is brisk and the infrequent action scenes crackle with tension, only two minor characters—gholas, who are young clones with restored memories, of Suk doctor Wellington Yueh and God-Emperor Leto II—acquire real depth. Everyone else is too busy reacting to mostly irrelevant subplots like sabotage aboard the no-ship , a plague devastating the planet of Chapterhouse and the genetic engineering of marine-dwelling sandworms. The lengthy climax relies on at least four consecutive deus ex machina bailouts, eventually devolving into sheer fairy tale optimism. Series fans will argue the novel’s merits for years; others will be underwhelmed.