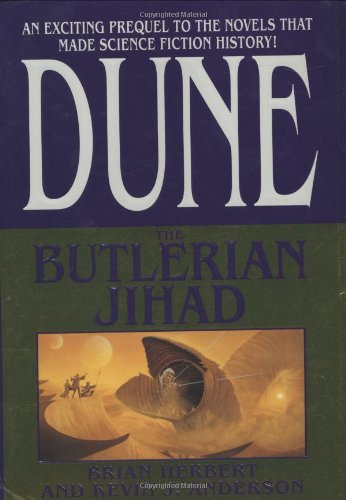 The sands of time have not diminished the impact has had on the evolution of SF, and this new prequel by Frank Herbert's son and bestseller Anderson, following 2001's (the concluding volume of their "House" trilogy), offers the kind of intricate plotting and philosophical musings that would make the elder Herbert proud. Reaching back into the beginnings of Arrakis, the authors show us Selim, a boy cast out by his tribe who discovers how to ride the fearsome giant sandworms. Selim tastes and learns the visionary power of the magical spice, melange, and how the future of Arrakis hinges on who controls it. At the same time, on planets far removed from the desolate dunes of Arrakis, others are involved in a Great Revolt. Free League World humans, led by Tercero Xavier Harkonnen and Serena Butler of Salusa Secundus, battle Omnius, a computer "evermind" intent on extending its dominion. The ominous Omnius seeks to conquer all planets not yet incorporated into his Synchronized Worlds system with the help of servile robotic extensions and colleagues, including Erasmus, a Thinking Machine "Hannibal Lecter" whose whimsical Mr. Spock–ish meditations enliven the proceedings immeasurably. Throughout, key revelations regarding the Zensunni Wanderers and their fight for freedom and other historical Dune elements lend an air of discovery to this fast-paced tale.