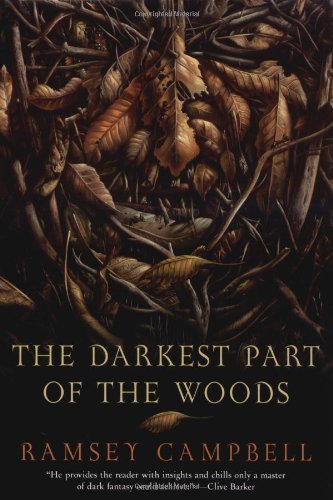 THE DARKEST PART OF THE WOODS

A forest haunted by a horror older than time and channeled by one unfortunate family is the foundation of this gripping horror extravaganza, Campbell's first novel of the supernatural in six years. Set in environs fans will recognize from his early Lovecraftian fiction, it focuses on the Price family, who have had an uneasy association with Goodmanswood since patriarch Lennox migrated to England to study its dark legends and succumbed to belief in them. With Lennox institutionalized and serving as cult leader to some of the asylum's creepier inmates, the responsibility to hold the family together has fallen to daughter Heather, a library archivist who traces her father's cryptic remarks about the woods' history to accounts of Nathaniel Selcouth, an alchemist who resided there and who schemed "to create a messenger or servant that would mediate between him and the limits of the universe, both spiritual and physical." Heather's investigations dovetail with sightings by frightened neighborhood children of a grotesque "sticky man" glimpsed among the trees, and strange events that bedevil the family. Campbell () is at the top of his form here, infusing every scene and scrap of dialogue with a sense of inescapable menace and manipulating nature imagery in such a way as to give it a malignant supernatural character. A richly textured tale of modern horror with classic roots, it confirms Campbell's reputation as one of the most formidable dark fantasists working today.