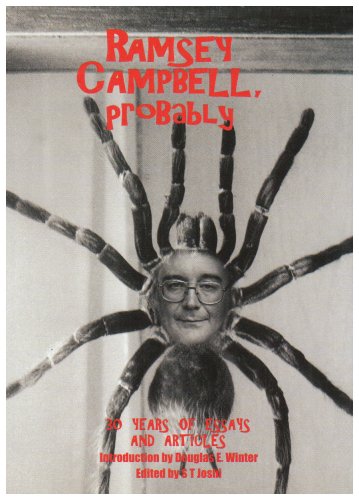 Anything new from the pen of British horror master Campbell (, etc.) is cause for celebration. Drawing together essays, introductions, afterwords and reviews from diverse sources dating back to 1984, this book displays some of Campbell's rarely seen facets. "Fiedler on the Roof" stands as a withering response to an academic's blanket criticism of horror. Campbell is also in fine form defending good horror in "The Crime of Horror." He spares neither censors nor creators of mediocre work in such forays as "Turn Off" and "Floundering on the Bottom," but he's no less merciless in assessing his own failures ("Chasing the Unknown" and the introduction to his collection of early tales, ). The real surprise comes in discovering how funny Campbell can be. He admits that if he were not who he is he'd be a stand-up comedian, and this is borne out in such essays as "Fame!," "A School Visit" and the Biercian "Horror Writer's Lexicon." For those seeking something grimmer, "Near Madness" is as harrowing as (and its truth more upsetting than) any of Campbell's stories. "Strapped for Cash," an amusing piece on spanking films, could have been much shorter, though as a rule when the author does digress, he does so magnificently. A detailed bibliography will please scholarly fans. Campbell displays the wide erudition and insight that make his stories so memorable and, with its analyses of film, writing and life in general, this is a must-have for anyone interested in the creation of fiction.

The Darkest Part of the Wood