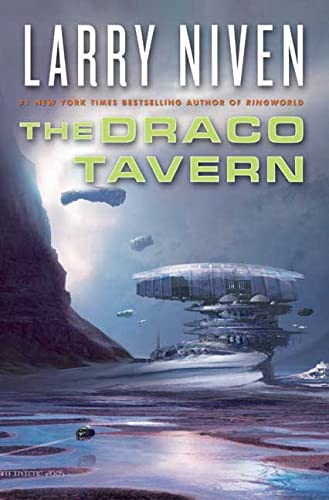 The cantina scene in , as Niven ( ) points out in his introduction, partakes of "a hoary old tradition," as do the 27 Draco Tavern stories in this solid SF collection. Most of the tales, set in the 2030s, are short-shorts, often reading like brilliant, half-whimsical notebook jottings. The inverted city carved out of the ice by ocean-dwelling creatures on Europa in "Playground Earth" could be the basis for a novel. Niven tosses it off in a sentence. Many of the best moments are similar hints: an overheard conversation about how an alien species casually denied humans immortality because the perception of death flavors human poetry ("Limits"). The most startling perspective of all comes from "The Green Marauder," in which a two-billion-year-old creature explains how the Earth was "ruined" by "pollution" long ago. These stories are best taken a few at a time, to savor their inventiveness without noticing the undeveloped characters or that, even for bar stories, there's sometimes too much chatter and not enough action.