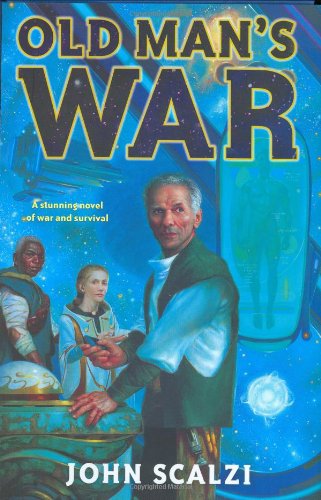 Though a lot of SF writers are more or less efficiently continuing the tradition of Robert A. Heinlein, Scalzi's astonishingly proficient first novel reads like an original work by the late grand master. Seventy-five-year-old John Perry joins the Colonial Defense Force because he has nothing to keep him on Earth. Suddenly installed in a better-than-new young body, he begins developing loyalty toward his comrades in arms as they battle aliens for habitable planets in a crowded galaxy. As bloody combat experiences pile up, Perry begins wondering whether the slaughter is justified; in short, is being a warrior really a good thing, let alone being human? The definition of "human" keeps expanding as Perry is pushed through a series of mind-stretching revelations. The story obviously resembles such novels as and , but Scalzi is not just recycling classic Heinlein. He's working out new twists, variations that startle even as they satisfy. The novel's tone is right on target, too—sentimentality balanced by hardheaded calculation, know-it-all smugness moderated by innocent wonder. This virtuoso debut pays tribute to SF's past while showing that well-worn tropes still can have real zip when they're approached with ingenuity.