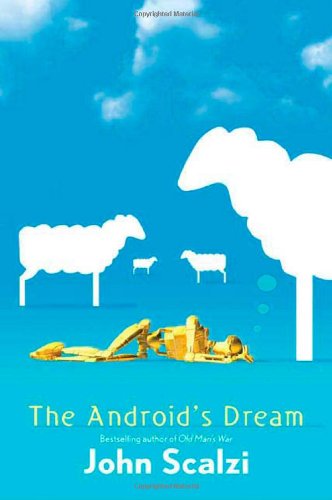 Scalzi's swashbuckling satire of interstellar diplomacy (after 2005's ) stars Harry Creek, a low-level State Department deliverer of bad news to alien ambassadors to Earth who's also a war hero and a computer genius. When Earth faces destruction over a diplomatic faux pas with the Nidu alien race, Harry must find and deliver the Android's Dream, an electric-blue breed of sheep, to the Nidu for their coronation ceremony. Dodging Defense Department assassins and Nidu space marines, Harry and Robin Baker, a pet shop owner with sheep DNA in her genes, flee Earth and find their own way to attend the Nidu crowning. Also on the quest for the sheep are disciples of the Church of the Evolved Lamb—founded by an early 21st-century SF writer of "modest talents." With plenty of alien gore to satisfy fans of military SF and inventive jabs at pretend patriotism and self-serving civil service, Scalzi delivers an effervescent but intelligent romp.