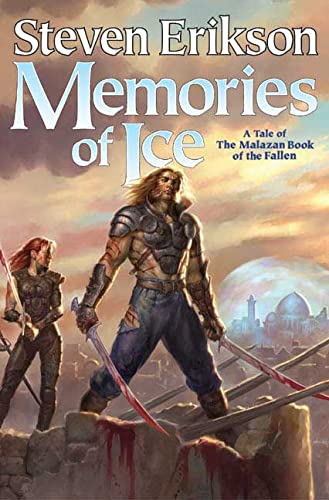 Memories of Ice: Book Three of the Malazan Book of the Fallen

Battle dominates the gripping third installment of Canadian Erikson's projected 10-volume series ( , etc.), set in the land of Malazan and featuring a host of gods, grunt soldiers, wizards and undead. Ganoes Paran is now captain of the Bridgeburners, part of Dujek Onearm's army that's trying to fight off the vile forces of the Pannion Domin. The author vividly details the horrors of hand-to-hand combat along with the cannibalistic tendencies of the Tenescowri (or peasant) rabble that fight for the Pannion Domin. The most intriguing new character is Itkovian, a commander of the mercenary Grey Swords who finds, after the battle of Capustan, that his god has deserted him. For a giant fantasy series, this is tightly written, with no repetitious dialogue or exposition. Erikson ranks near the top of the epic fantasy pantheon.