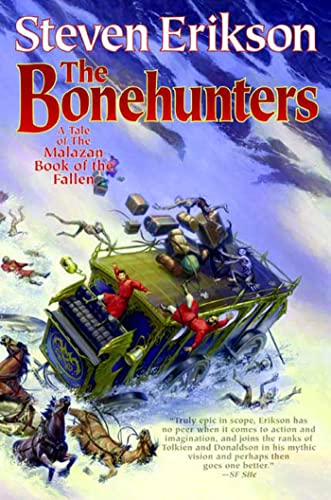 The Bonehunters: A Tale of the Malazan Book of the Fallen

The weighty and grim sixth installment of Erikson’s Malazan Book of the Fallen (chronologically following 2006’s , with references to 2007 tie-in ) is named for a newly minted company in the Malazan 14th Army, forged in a daring and nearly fatal effort to escape a city destroyed by fire by burrowing through its skeletal underbelly. The Bonehunters’ return from the dead is a theme that appears throughout this volume, as the prophetess Sha’ik dies and is reborn as a plague maiden, warriors recover from hideous wounds, and seer Ganoes Paran strikes a bargain with the dread god Hood that just might end up saving the world. Erikson brings the bulk of his enormous cast together in one volume for the first time, an effort designed to keep fans engaged as myriad plot lines tangle and sprawl over an increasingly bleak and war-ravaged landscape.