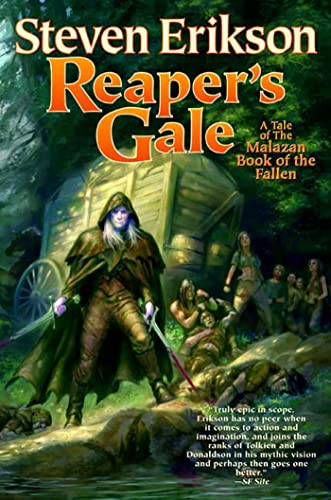 Reaper’s Gale: Book Seven of the Malazan Book of the Fallen

In this bloody and dour seventh entry in the Malazan Book of the Fallen series (after 2006’s ), the Letherii empire is under siege from within and without. The Tiste Edur uneasily rule the Empire of Lether, against the will of the Letherii people. Several factions in Lether seek to overthrow Rhulad, the emperor of a Thousand Deaths, who “is quite probably insane” and sinks further into madness every time he dies in combat and his sword resurrects him. Two forces also threaten Lether from the outside: the tribal Awl, led by the brutal warrior Redmask, force a confrontation, while a flotilla from the Malazan Empire sails toward the Letherii capital. The plethora of characters, attacks and counterattacks, hidden schemes and battling gods will mostly appeal to serious fans of brutal and complex epics, at least those who have fortified themselves by reading the earlier books.