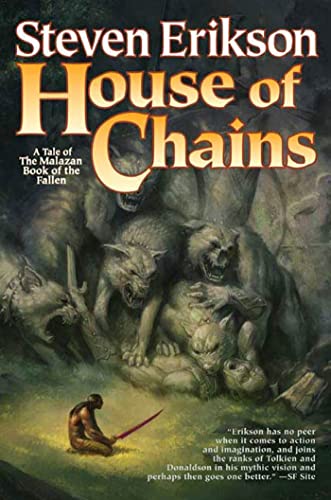 House of Chains: Book Four of the Malazan Book of the Fallen

Longtime fans may be surprised by the fourth book in Erikson's masterful fantasy epic that began with (2004), because the long opening section follows a single character, the Teblor warrior Karsa Orlong, and his companions on a gory raid through enemy territory and into the human lowlands of Northern Genabackis. The time-hopping, perspective-shifting, looping story lines typical of this Canadian author return later, as Erikson ties Karsa's actions to the ultimate showdown between the forces of the Malazan Empire and Sha'ik's Army of the Apocalypse. Against a backdrop of brutal power struggles, the stubbornly determined Karsa is able to accomplish more than even he could have imagined. Unusual among fantasy writers, Erikson succeeds in making readers empathize equally with all sides involved in his world's vast, century-spanning conflict. Newcomers will eagerly seek out previous books in the series.