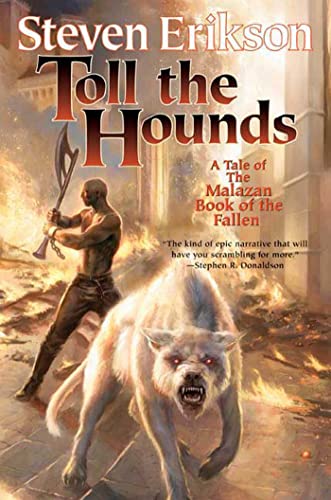 Toll the Hounds: Book Eight of the Malazan Book of the Fallen

Book eight in the intensifying Malazan series (following 2007's ) sees the grinding, bloody clash of newly created deities against longstanding, increasingly powerful Gods. The Crippled God, born in the city of Darujhistan, and the Dying God, who bleeds a poison that enthralls and addicts his followers, both vie for a place in the formal pantheon, using humans and the goddess-descended Tiste Andii as pawns in their unholy, greedy game. Warrior-hero Anomander Rake subtly manipulates the factions from the sidelines. Finally, the gods' slaves and representatives and the common people of the Darujhistan meet in one dark, thunderous, transformative night. This is a praiseworthy entry in the massive series encompassing multitudes of characters, complex plot lines and grotesque violence, but it's not lightweight in tone or in heft, and new readers will be entirely at sea.