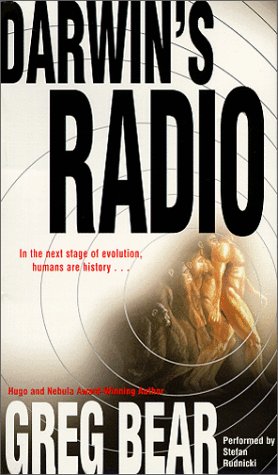 In the medical/SF tradition of Robin Cook, Bear (Blood Music) spins an outlandish tale of evolutionary apocalypse. In an ice cave in the Swiss Alps, Mitch Rafelson, a renegade paleontologist, discovers a frozen Neanderthal family, including an oddly evolved infant. Meantime, in Soviet Georgia, Kaye Lang, a microbiologist, is investigating a massacre site, where pregnant women were exterminated. These events relate--by way of elliptical scientific reasoning--to a retrovirus being hunted by U.S. government scientist Christopher Dicken. Called SHEVA, it causes genetic mutations in embryos and may also be an agent of evolution, ushering into being a new race of humans. Is it a sexually transmitted disease? Or, more sinister, is it a God-sent means of delivering up a new Adam for the millennium? When Mitch and Kaye fall in love, then decide to bring their own SHEVA baby to full term, they are about to find out the truth firsthand. This complicated tale is read somberly by the deep-voiced Rudnicki, who works hard to keep the sense of drama high through all the mumbo jumbo. Simultaneous release with the Ballantine hardcover. (Sept.)
close
Details