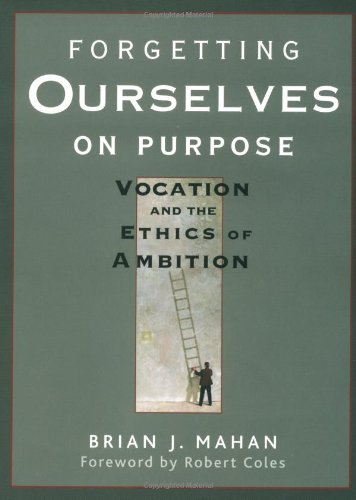 FORGETTING OURSELVES ON PURPOSE: Vocation and the Ethics of Ambition

Do we all have "shadow governments of compassion and idealism"? In this odd, sometimes disjointed but always engaging meditation on the relationship between vocation and ambition, Mahan answers yes. Referencing Thomas Merton, Frederick Buechner, William James, Walker Percy and Leo Tolstoy, Mahan muses rather than argues, and ends each chapter with assignments gleaned from the college courses he has taught on this topic. For example, at the end of one chapter, he invites readers to hold a national press conference at which they attempt to rationalize an episode in their lives when they engaged in repeated self-deception leading to serious moral compromise. Each chapter and assignment leads readers, in one way or another, to examine the tension between the lives they would live—governed by compassion, in complete harmony with God's calling, entered into via "epiphanies of recruitment"—and the socially scripted, ambition-driven lives they do live. Pleasantly surprising is Mahan's light touch: he never resorts to heavy-handed homilies about how bereft conventional lives are, but rather invites readers to observe themselves living such lives, and to do so nonjudgmentally, with equal parts good humor, discomfort, acceptance and motivation to change. While encouraging readers to attempt mystical and imaginative exercises, Mahan ultimately avoids prescription. On the contrary, he ends by suggesting that ambition and vocation are not mutually exclusive, and that God delights in any and all attempts that flawed, inevitably ambitious people make to live according to their ideals.