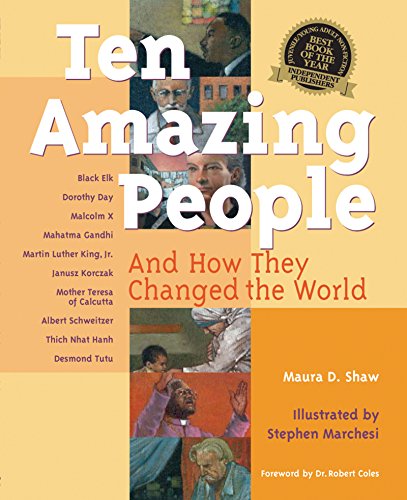 TEN AMAZING PEOPLE: And How They Changed the World

Shaw () profiles Desmond Tutu, Black Elk, Mother Teresa and Janusz Korczak, among other 20th-century leaders, in this informative volume. Each figure receives two spreads, on which are a full-page, collage-like painting, several columns of biographical text, a quote, definitions of salient terms, a chronology and a "fascinating fact." In introducing Mahatma Gandhi, for example, Shaw emphasizes that is best understood as "peaceful—not passive—resistance"; defines the terms "caste system" and "British empire"; and offers the fact that upon Gandhi's death his only possessions were sandals, a watch, glasses, bowls and spoons, and a book of songs. The subjects are not all equally famous: one entry discusses the Vietnamese Buddhist monk Thich Nhat Hanh, who was exiled from his homeland in 1964 for his leadership in the peace movement. Shaw admirably distills complex ideas into age-appropriate presentations; the design, however, tends to bombard readers with competing presentations, to some extent undoing Shaw's accomplishment in streamlining the material. Despite the use of different colors to distinguish the text blocks, the somber quality of the illustrations and the fact-box-heavy pages give the volume an institutional appearance. Ages 6–10.