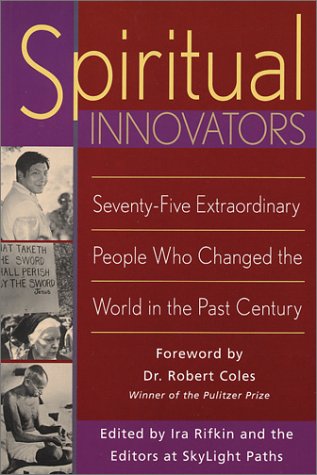 SPIRITUAL INNOVATORS: Seventy-Five Extraordinary People Who Changed the World in the Past Century

In this eclectic tome, religion reporter Rifkin brings together 75 portraits of 20th-century spiritual leaders, providing brief biographical overviews, excerpts from the leaders' own writings and abbreviated bibliographies of works by and about the subjects. The book is marked by the impressive ecumenism that readers expect from SkyLight Paths publications: subjects include Catholic Worker founder Dorothy Day, Orthodox rabbi Abraham Isaac Kook, Hare Krishna founder Bhaktivedanta Prabuphada, pagan author Starhawk and evangelist Billy Graham. Many of the entries vividly bring their subjects to life. The entry on Reinhold Niebuhr succinctly conveys the essence of Christian Realism, and the chapter on Ram Dass movingly discusses the impact that his 1997 stroke had on his thinking about suffering and patience. But some of the entries are unsatisfying, even problematic. The discussion of C.S. Lewis, for example, is little more than a curriculum vitae in paragraph form; the author fails to convey what was distinctive about Lewis's work or why we should consider him an "innovator." The entry on Simone Weil praises the French activist as "a role model for everyone who has struggled honestly with faith in the face of mistrust of organized religion," but fails to mention, let alone account for, Weil's troubling record of anti-Semitic stances. The collection is, at times, stirring, but it serves better as an inspirational, agreeable read than as a reference book. The entries are too brief and uneven to be of use to the critical student.