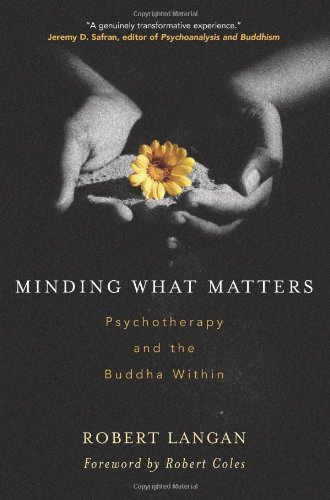 Minding What Matters: Psychotherapy and the Buddha Within

Aspiring to a new genre of "literary self-help," this work by psychoanalyst and Buddhist practitioner Langan requires patience. The first sentence ("People do things for different reasons, though sometimes their reasons are the same") will winnow the impatient, who will dismiss this as pretentious, from those who welcome the prospect of an intensely ruminative book. It's uniquely organized, alternating chapters written as essays on aspects of Buddhism and psychology with italicized vignettes that describe the relationship between a fictional analyst and his patient. Then follows a section of quasi-footnotes—"sources and associations"—that are difficult to correlate with the text because they are marked by asterisks, unnumbered and often woolly ("This play of shifting forms is quite the opposite of the of the British Victorian poet William Ernest Henley...."). Langan's free-associative writing style is appropriate for a therapy session, but becomes a little idiosyncratic in a book, as though the reader has been handed a first draft. "I can choose to assimilate you. (Resistance is futile.)" could be clever, but such allusive exposition slides past those who don't recognize the slogan of the Borg, the villainous assimilators of . Langan is ambitious, but his literary aspirations sometimes obscure rather than illuminate his meaning.