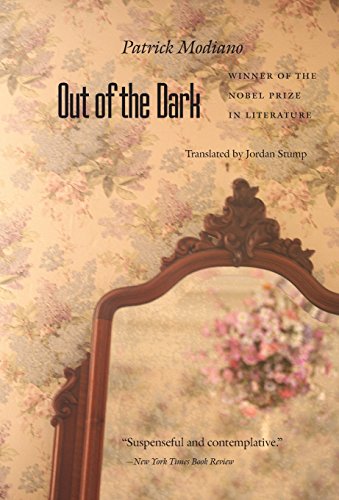 Out of the Dark

Well-known in France (this, his 14th novel, was published there in 1996), Modiano tackles characteristic themes of love and loss in this elegiac work. The narrator, a middle-aged writer, looks back to the early 1960s when he was an aimless ex-student who fell in love with Jacqueline, a young drifter. Set in Paris and London, the story unfolds in simple dreamlike sequences. The student has left college and sells used books to eke out a sparse income. The enchanting, enigmatic Jacqueline lives off the men she meets--G rard Van Bever, a salesman (""the smell of ether was always hanging in their room""); Pierre Cartaud, a dentist; Michael Savoundra, a filmwriter; and Peter Rachman, a wealthy real estate dealer--while she yearns to live in sunny Majorca. The student is without ambition; he exists to attend to Jacqueline. His life weaves as willingly with hers as she will allow--until one day she disappears. Years later, they meet again; the student, now the writer, looks back at himself and Jacqueline and concludes: ""We had no real qualities, except the one that youth gives to everyone for a very brief time, like a vague promise that will never be kept."" This is a tale of life lived within a dream, and there is a motionless quality, as if Paris and London are not quite real, that serves the book's themes well. The unlived lives, the dreams of escape, the use of drugs, the constant appearance and disappearance of people without explanation, the spare symbolic imagery--all staples of Modiano's work--are replayed here to admirable effect, while the author's lucid prose carries the reader into his hermetic world. Translated smoothly by Stump, the narrative offers an accessible introduction to Modiano's work. (Oct.)
close
Details