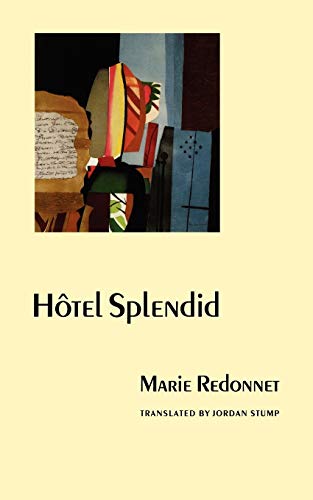 Built at the edge of a swamp and over an underground lake, the Hotel Splendid had given its owner, the book's narrator, ``nothing but satisfaction'' since she inherited it from her grandmother. Until, that is, she was visited by the plagues that drive this spare and darkly comic novel. The first plague comes in the form of the narrator's two sisters, who had left their grandmother's hotel to wander through Europe in search of sanitoria for the sickly Ada and a stage for the would-be actress, Adel. Spoiled and petulant, Ada and Adel offer their sister little help as she tries to cope with pests (flies, mosquitoes, rats, bedbugs, spiders, termites); workmen (carpenter, cabinetmaker, roofer, plumber) and their bills; and guests (prospectors, geologists, team foremen, engineers) associated with an ill-fated trans-swamp railroad line. The Splendid is the only home the narrator has ever known and she remembers its early history as a incongruously swank hotel (the grandmother had each room built with a toilet, the bane of her granddaughter's days) shimmering at the edge of nature's mucky, encroaching chaos. It's a great image and Redonnet makes skillful use of the broadly metaphoric possibilities. It is the kind of novel Edward Gorey could love and, sometimes, reading Redonnet's telegraphic prose, one it seems he might even have written. (``Adel had a fit of hysterics. She wears a corset to make her stand up straighter. It squeezes her too much, it constricts her heart and she has spells. Sometimes she faints in front of the guests.'') (Nov.)
close
Details