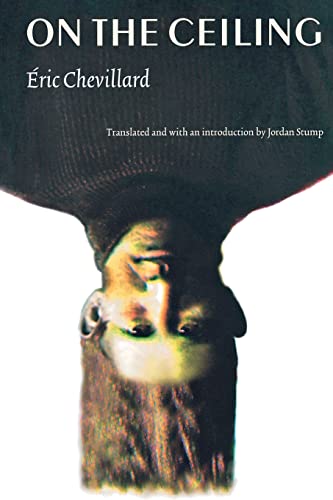 In the tradition of Ionesco or Jarry, Chevillard, one of the bright spots in recent French literature, is at his absurdist best in this surreal fable. The narrator dresses in gray, is not particularly tall and has an ordinary face; nevertheless, he manages to draw unwanted attention wherever he goes. He has to stoop to pass through any doorway, has to ride only in convertibles, and has to wear clothes that button down the front. Nothing, he laments, has been done to accommodate him, not that he's complaining. So what's a person who constantly wears an upside down chair on his head to do? The answer, it seems, is to move onto the ceiling. When the narrator and his friends, including Kolski, who wants to make a sculpture from his own body odor, and Madame Stempf, who refuses to give birth to her children, viewing ""obstetrics as a forced eviction at the hands of unfeeling brutes,"" must leave their home on an abandoned Paris construction site, they move in with M line, the narrator's girlfriend, and her bourgeois family. But M line's bedroom is too small to accommodate everyone, so the newcomers make their home on the more spacious ceiling. The narrator has high hopes for his theoretically splendid new digs: ""neutral, virgin space open to the unconstrained application of [man's] gifts"" However, the ceiling begins to look a lot like the floor, affected by the same irksome close-mindedness as the world below. In the unusual narrator's worldview, conventional use of space and furniture is confining, as a chair ""imposes a direction on our gaze, given the inability to unscrew our neck,"" and makes ""restless crowds of scatterbrained individuals... into an audience."" Chevillard's surprising, skillful prose and bizarre humor focus on life's stranger possibilities, allowing readers to see things from a distinctly different perspective. (Sept.)
close
Details