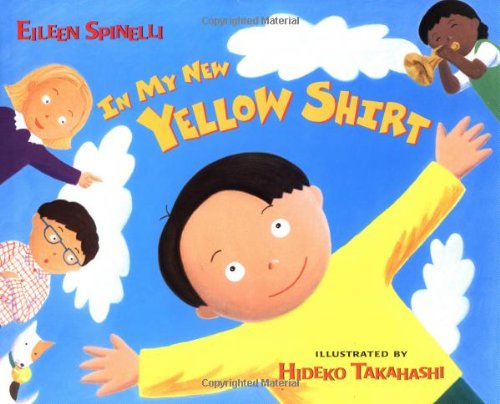 IN MY NEW YELLOW SHIRT

When a boy receives a new yellow shirt for his birthday, he spends the day pretending to be one yellow creature after another. He's a lion scaring the crows in Mrs. Miller's garden, then a caterpillar taking a nap and a fancy tropical fish swimming in his best friend Sam's backyard pool. Despite some apt images (e.g., at one point, the hero is "a butterfly fluttering away"), Spinelli's () text occasionally lapses into coy phrases: "In my new yellow shirt/ I am a tennis ball/ bounce-bounce-bouncing/ at the playground./ …/ I am a canary singing tweetily." Both the narrative and the Takahashi's () illustrations fluidly and subtly develop as a subtheme the nature of the boy's friendship with Sam. Unfortunately, in a couple of key places, the text and art do not match. For instance, for the hero's first fantasy, the text states, "In my new yellow shirt," but the illustration shows the boy bare-chested, sitting in a swimming pool with a yellow duck (which he turns into on the next spread). Because there's no other visual or design distinction between reality and the boy's fantasy, this may be confusing to youngsters. The boy's visual transformations are inconsistent. In another case, the illustration misconstrues Spinelli's metaphoric language: when at bedtime, the boy describes the yellow shirt as "a smile of a moon/ in my very own room," the painting depicts a shirt-shaped light (reminiscent of Batman's famous signal) in lieu of a moon outside the house. A flight of fancy that doesn't quite take off. Ages 2-5.