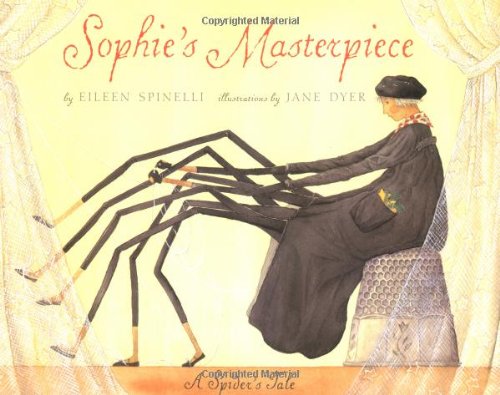 The team behind here introduces readers to a spider who weaves with grace and serves others with courage. Dyer's gently tinted watercolors show Sophie as a blond with a human face and a perpetually tranquil expression (often sporting a beret); her eight-limbed body, with its two arms and six colorfully-stockinged legs, seems perfectly believable. Over time, the tender-hearted arachnid weaves garments she thinks the human boarders in the boardinghouse she inhabits will find useful, but she's always chased away before she can complete them. Tiring of her nomadic life, she discovers at last a quiet mother-to-be who is not afraid of spiders—and who hasn't enough money for a baby blanket. Sophie, now nearing the end of her life, then starts on her last project: "She was down to the farthest corner of the blanket when she heard the cry of the young woman's newborn baby. And there, on that farthest corner, is where Sophie wove into the blanket her very own heart." Dyer paints Sophie in various spidery attitudes; in one painting, she dozes in a knitting basket, dwarfed by huge balls of yarn. Later, at work on her pièce de résistance, she crouches, silver-haired, beside a snowy windowpane. Spinelli and Dyer's story of devotion and generosity is as delicately woven as Sophie's own work. Ages 4-7.