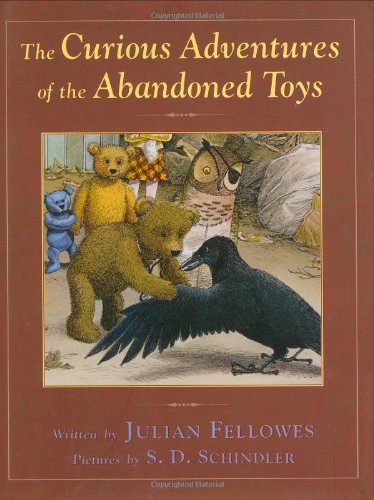 The Curious Adventures of the Abandoned Toys

Fellowes, a British actor, director, producer and Oscar-winning screenplay writer (for ), presents a leisurely paced story, noteworthy for its polished delivery of a familiar theme—the afterlife of the discarded or lost toy. For years Doc, a teddy bear accessorized with a stethoscope, has comforted children in a hospital dayroom. His generosity of spirit makes him chief among “what the nurses referred to as the 'cuddly toys,’ although there was an element of impertinence in this which most of the occupants of the [toy] basket found rather irritating.” But after the hospital hastily spruces up the dayroom in preparation for a much-publicized royal visit, Doc winds up at a dump, grateful to have escaped a worse fate. The rest of the plot revolves around Doc’s adventures with his new friends, also toys separated from children and coping with their diminished status in various recognizably human ways. All rally when a threadbare stuffed rabbit arrives, inadvertently tossed into the trash instead of put into the van when his owner’s family moves to a new house, and together the toys come up with a risky scheme to reunite rabbit and boy. Schindler’s ( ) full-page ink-and-watercolor illustrations and his line art match the old-fashioned storytelling mood: he renders the toys and the settings with fine detail, using a realistic style to bridge the fantastic elements in the narrative. The abundance and richness of the pictures enhance this title’s attractiveness as a read-aloud, as does the elevated vocabulary—the book offers a rare combination of the soothing and stimulating. Ages 4-up.