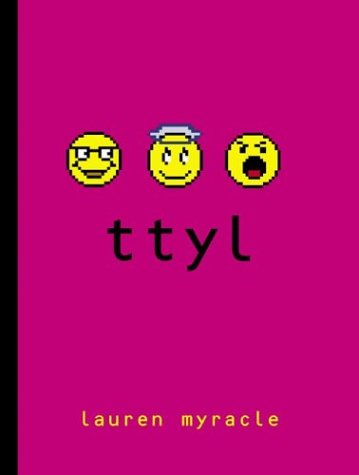 Myracle's ( ) approach is creative, even if her newest novel is somewhat formulaic: three best friends hash out their lives—from new relationships to conflicts with one another—through instant messages. As they start 10th grade, social Angela catches her new boyfriend on a date with another girl; tough Maddie is befriended, then humiliated, by a popular girl; and "good little Zoe" finds herself crushing on a teacher—who seems to be interested in her, too. Though the main characters and the plotting seem familiar, readers will appreciate Myracle's portrayal of the supportive friends: they listen to one another, plan a surprise party and a road trip, and when Maddie is low, Angela and Zoe make her a care package with a poem that Angela calls "mushy but not 2 mushy." Their messages at times contain too much plotting to seem like realistic chats, but the style makes for an engaging, quick read. Flourishes such as emoticons and Internet lingo add realism; the book's title translates to " ," and Angela adds stage direction to her messages, writing " " (when she believes Maddie is withholding information) or " " (when Zoe promises her a makeover). As might be expected, there is a falling-out among the friends. But while Maddie's reaction when she catches Angela and Zoe discussing her behind her back seems too extreme, readers will cheer their reunion, which happens just as Zoe's teacher makes his move. Ages 13-17.