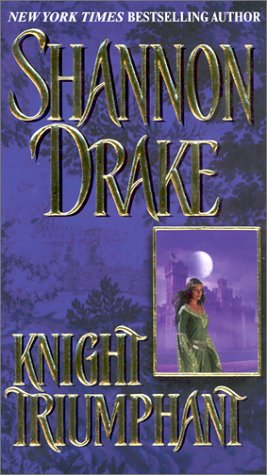 Set in Scotland in the early 1300s during the war between Robert the Bruce and King Edward I, the fourth book in Drake's Graham family series (following ) opens with a history lesson disguised as a fairytale, but quickly launches into an epic story of love, war and conviction. After escaping plague-ridden Langley castle shortly following her husband's death, Englishwoman Igrainia is captured by Scottish warrior Eric Graham, who seeks to free his wife and daughter from Langley's prison. Upon learning that his daughter is already dead and his wife is dying from the disease, the warrior threatens to kill Igrainia if she cannot save her. In short order, Eric's wife dies, the warrior himself falls ill, Igrainia nurses him back to health and then she tries to flee back to England. Once recovered, Eric recaptures Igrainia and eventually forces her to marry him, a political move that benefits Scotland but enrages both Igrainia and King Edward. This lengthy romance is loaded with period detail and brutal battles between Bruce and the Brits but, thankfully, Eric and Igrainia's fitful romance is always at the forefront. Although it takes a considerable amount of time and many obstacles for the two to realize they love one another, this is a well-researched and thoroughly entertaining read.

A Season of Miracles