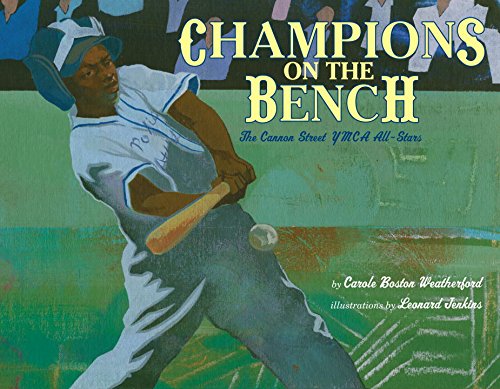 Champions on the Bench: The Cannon Street YMCA All-Stars

Weatherford ( ) again bases her tale on a true incident of prejudice in mid-20th century America. As the summer of 1955 begins, the young African-American narrator cheerfully observes, "All my baseball dreams seemed possible." Willie Mays led the majors in home runs and Hank Aaron made the all-star team. Playing in "the only colored Little League in all of South Carolina," Cleveland is thrilled when his coach selects him to pitch for the team. At the end of the season, his coach chooses Cleveland to play on the Cannon Street All-Stars team in the state tournament, where a victory would send the boys to the World Series play-offs. But Cleveland's dreams are dashed when his coach announces that the league's white teams had refused to play their team and instead had formed their own whites-only tournament. The boys travel to Pennsylvania to watch the Little League World Series from the stands, and the bittersweet experience leads Cleveland to declare he's never going to play ball again. His coach, however, bolsters his spirits: "You have to keep playing, so you'll be ready when you finally face the white teams." A concluding author's note fills in the details of the events that inspired her story. Punctuated with electric hues, Jenkins's ( ) somewhat murky pencil, acrylic and spray paint illustrations convincingly convey the sympathetic Cleveland's range of emotions. Ages 5-up.