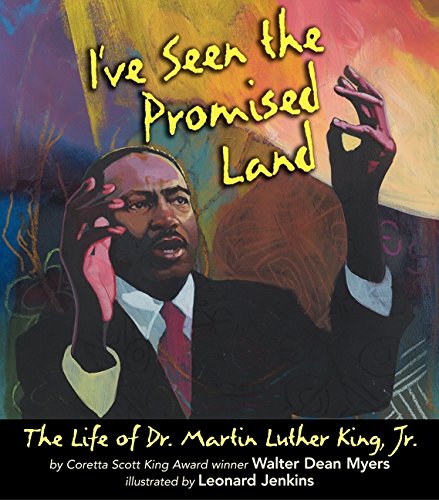 Although in their Myers and Jenkins concentrated a great deal on Malcolm X's childhood, in this concise chronicle of Martin Luther King Jr.'s crusade for civil rights, they highlight the pivotal points in his work. They begin with his role as leader of the 1955 bus boycott in Montgomery, Ala., sparked by Rosa Parks's arrest after she refused to give up her seat to a white passenger. Mohandas Gandhi, Malcolm X and John F. Kennedy number among those whom the author cites as individuals who touched the life of this remarkable Nobel Peace Prize winner. Myers's balanced narrative touches upon King's triumphs (notably his renowned "I Have a Dream Speech," delivered during the 1963 March on Washington) as well as the hatred and brutality he endured during his lifetime. Jenkins's ( , reviewed above) mixed-media paintings are involving but never graphic (he illustrates assault by fire hose and dogs, for instance, with an abstract painting of shadowy silhouettes of policemen and a dog tugging a piece of clothing). This picture book soars to the heart of King's mission, demonstrating the challenges of adhering to nonviolent methods when faced with so much violence in return. Jenkins's boldly hued illustrations capture lifelike renderings of King and other prominent figures while also incorporating backgrounds with a kaleidoscopic amalgam of shapes and symbols. Ages 5-8.