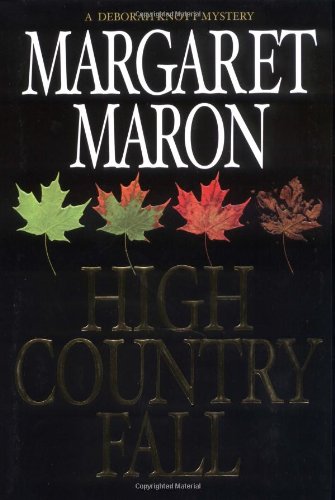 The leaves of autumn are in full splendor, and so is Maron's talent in her 10th Deborah Knott adventure (after 2002's ). Asked to fill in for a vacationing judge up in the Blue Ridge high country, Deborah jumps at the chance to put some space between her and Colleton County detective Dwight Bryant, whose engagement ring has suddenly and almost inexplicably appeared on her finger. But Knott quickly finds that the serene appearance of Cedar Gap belies the troubles brewing beneath its surface. One man is dead before Deborah even arrives, and his accused killer, Daniel Freeman, is a friend of Deborah's nieces, who are sharing their parents' mountainside condo with Her Judgeship. Yet before heads or tails can be made of the current situation, Knott is present when an evening of pickin' and grinnin' ends with the disappearance of one of a newly formed trio of real estate developers. And her ride home with the stunningly handsome "Lucius the Luscious" Burke, the local DA, may just put an end to her quandary about getting hitched to Dwight. Her entire stay in Cedar Gap is fraught with dangers, romantic and otherwise, as Deborah finds herself pursued to the brink of death itself. The roadways aren't the only thing with hairpin turns in this gripping puzzler.