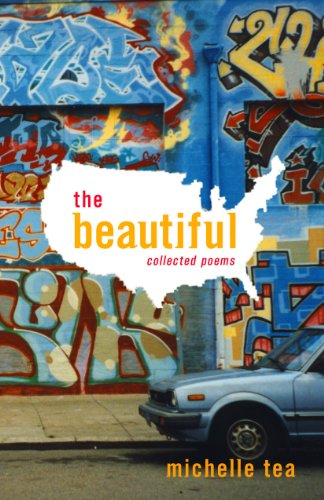 A young stalwart of San Francisco's queer underground, a onetime "lesbian feminist radical activist prostitute," and a survivor of Boston's roughest neighborhoods, Tea has won plaudits with novels (the Lambda Award–winning ) and a memoir ( ) which draw on her gritty experience. Her first success, though, came through the performance-poetry scene: Tea not only organized the famed SF Sister Split reading series but made a splash with her own readings and chapbooks in the mid-1990s. This expansive and fiery volume collects those chapbooks along with unpublished texts from those years, when Tea wrote (and performed) in-your-face work with a raw fanzine feel. "Listen, I come from pavement... here is my poetic apology," one says; another asks, "aren't all the poems/ a salvaged piece/ of something awful." Snappy sentences try hard to shock ("straight girls of America, I am lighting/ votive candles for your ignored and/ misused clitorises") while titles sometimes tell us what to expect ("On Learning My Lover Was a Whore And It's All Her Fault"). Tea's tough talk owes something to Nikki Giovanni, though older art works of any sort are kept at arm's length; instead, the poems make vivid Tea's own life, from the household she left in New England (with a leering father and a codependent mother) through college and the Tucson sex trade, to the happier life she made for herself on the West Coast, where queer activism does not rule out risky seductions, cigarettes and self-doubt. Hers is an art of emotions and direct statements, casual and harsh at once.