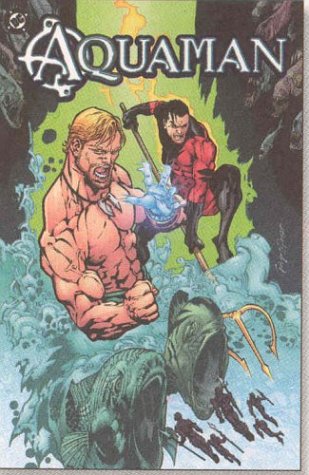 Aquaman, DC's underwater hero, gets an overcomplicated revamp inspired by Arthurian legend in this collection. An introduction summarizes previous events: Aquaman's death, his travel back in time, a fight with an evil sorceress and the raising and re-sinking of Atlantis. After seeing this daunting list of old story lines, readers who haven't been scared away will understand the need for a character update. The book begins with Aquaman sentenced to death by his former subjects as a result of these events. They've stuck him, wounded, on a reef, and all his formerly friendly fish hate him. Never mind the logic gap in a group of sea-dwellers who hate the surface world (as hammered home in the opening dialogue) being so mad over having to live underwater that they keep trying to hunt down their former king. All of this is a prologue to establishing the new status quo, in which Aquaman fights for the Lady of the Lake and her magical healing water. (Since this is a superhero comic, the Lady is well-built and wears revealing strips of fabric.) Everything in this book is either high-volume exaggeration or sappy mystical peacekeeping. Veitch goes overboard with poetic descriptions, sea references and puns, and laughable character dialect, while the story relies too heavily on deus ex machina. The confusing art has the "camera" zooming around almost randomly. A true restart would have been a better choice than this exaggerated mishmash of the worst superhero cliches.