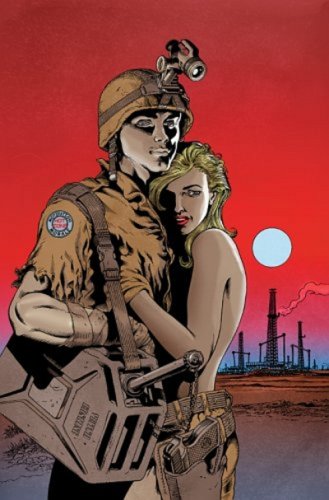 Veitch is one of comics’ most deeply cracked satirists, and the concept behind his new series is as bizarre as they come: a forced coupling of romantic soap opera and war-story action, bound together with a heavy dose of tar-black comedy about the corrupting force of globalized American capitalism. It’s set a few years in the future, when America’s war in “Afbaghistan” has gotten a shot in the arm from its “Motivation & Morale” division, which is in charge of making military service irresistibly sexy to thrill-seeking youth. (The Hot Zone Club is for people who’ve had the “ultimate peak experience” of sex under fire.) The central romance plot concerns a sleazy stage magician/soldier named Flabbergast, whose lover chats on a cellphone with her husband during firefights; the story’s overcrowded with dozens of subplots and minor characters, including a secretary of war who collects celebrity hair clippings and a military-robot operator with Down syndrome who’s got a mother so overbearing she intimidates insurgent raiders. Veitch’s lacerating writing riffs on clichés both military and erotic—usually both at once—and his artwork does the same, conflating the glamorous lushness of fashion ads with the scrappy precision of combat journalism and vintage war comics.