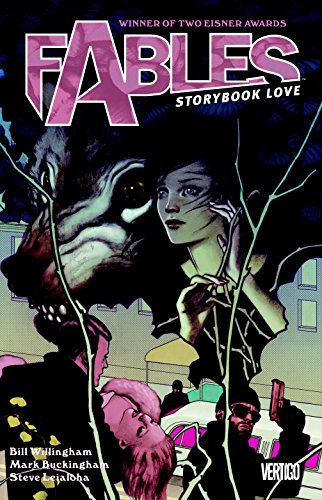 One of the stories in this new collection is appropriately titled "Into the Woods." Like Stephen Sondheim's musical, Willingham's series presents figures from childhood fairytales contending with the problems of adult life. Snow White, Briar Rose (aka Sleeping Beauty), Prince Charming, Little Boy Blue and Goldilocks all appear, as does a trickster named Jack. So does the Big Bad Wolf, who is inescapably reminiscent of Marvel's Wolverine. Even Gulliver's Lilliputians turn up, as do talking animals. This volume collects issues 11 through 18, and, as with many contemporary comics, it will be difficult for readers who haven't started with the first issue to get their bearings. The fairytale characters comprise a community of immortals known as "Fables," who now hide in plain sight from the mundane normal people (known as "mundys," they're much like J.K. Rowling's muggles) in a section of New York City called Fabletown. The stories are of two sorts. Two stand-alone tales take place in past centuries and have a genuine fairytale feel and period charm. The others, set in the present, are gritty, with dysfunctional relationships, blackmail and murder attempts. Take the "mature audiences" advisory seriously: this is a book in which an adult Goldilocks can be seen naked or covered with blood. Despite its darker elements, features wit and comedy; Willingham can even make scenes simultaneously farcical and horrific. The art ranges from the illustrative to cartoony, and its variety mirrors the stories' many moods.