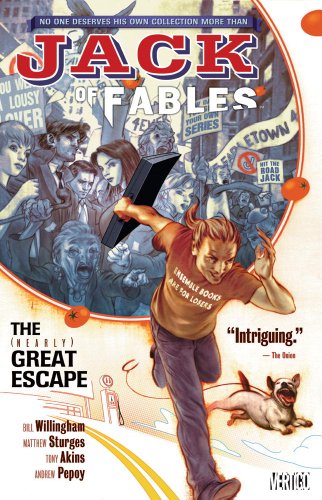 Willingham first created a contemporary world inhabited by fairy tale characters in his series, . He continues that success with Sturges, who co-writes this recent spinoff. A new story line further develops Jack Horner's escapades in Hollywood and establishes him as the most dangerous Fable loose in the "mundy"—short for "mundane"—world. Jack is forced into the Golden Boughs Retirement Community, a jail of sorts where Fables are imprisoned until society-at-large forgets about them, thereby diminishing their magic powers. Enlisting the support of Goldilocks and a cage full of fairies, Jack plans the entire retirement community's escape. Willingham and Sturges give Jack a bad-boy attitude, making him an everyman hero that readers won't always identify with, but will enjoy watching flub and fake his way to freedom, complete with clever riffs on the Turtle and the Hare, the Toothfairy, Mother Goose and Humpty Dumpty. Readers will enjoy this more if they first familiarize themselves with Willingham's established Fables world ( , , etc.). Rated for mature readers, the tale includes sex, nudity, corruption, so it's got a little bit of everything that any sophisticated comics fan will enjoy.