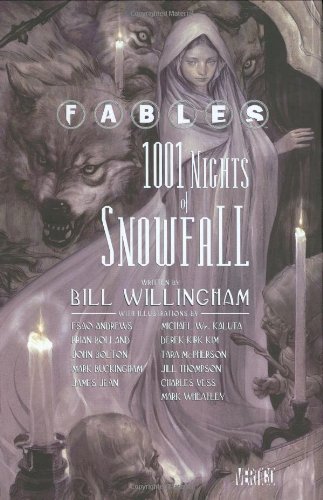 Probably the smartest mainstream comic going, usually concentrates on the contemporary activities of characters from children's stories who now are living as secret refugees in New York. This collection gives glimpses of their individual backstories before the armies of the brutal Adversary drove them out of Fairyland. Readers will learn, for example, what spoiled the Big Bad Wolf's disposition and what happened to the witch Hansel and Gretel pushed her into the oven. It would be relatively easy to do clever, merely cynical readings of the fairy tales, but Willingham is after something much more interesting. Like Neil Gaiman and Tanith Lee, he's reimagining the old stories, trying to see why they have survived and also to point out the aspects they somehow neglect: it's only natural that Snow White would take revenge on the seven little rapists who abducted her, but the independent way she goes about it casts doubt on her subservient relationship to Prince Charming. Willingham reminds readers of how much they ignore in their anxiety to believe that all stories end happily ever after. Artists like Charles Vess, Mark Buckingham and Jill Thompson work up to the level of the perceptive scripts, making this a memorable, uncomfortably amusing treat.